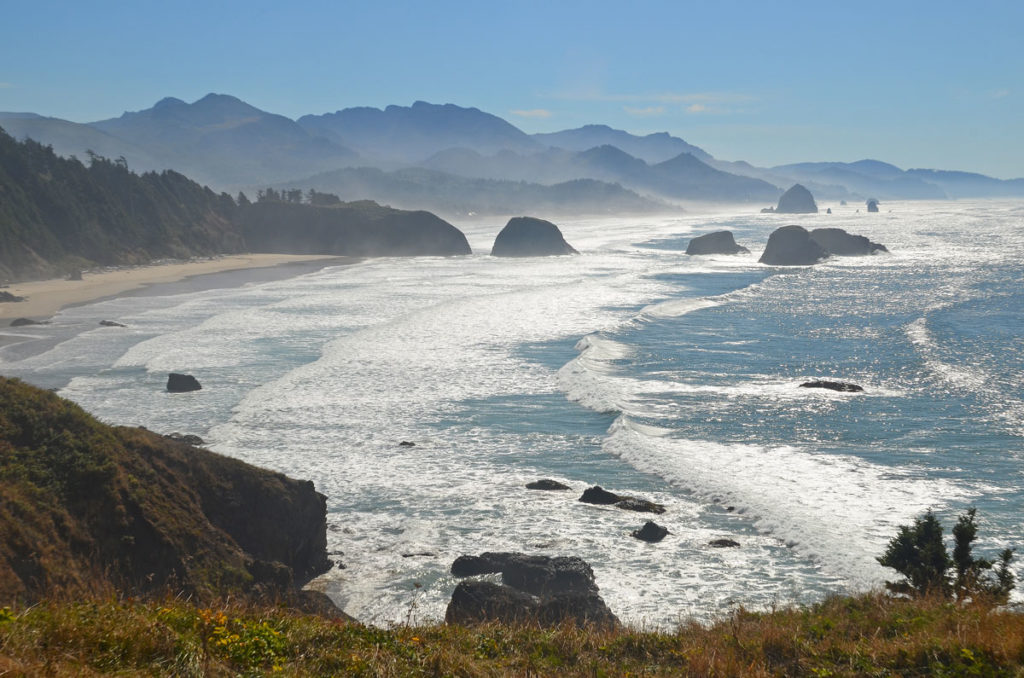 For camping, my wife and I have been moving toward a minimalist approach, having sold our 23’ travel trailer in the spring. We didn’t even bring our pickup truck or use a tent. Instead, Mary and I slept comfortably in the back of our Subaru Outback. While hanging around camp, this forced us to spend more time outdoors, surrounded by nature. This also made breaking camp a breeze.

For this trip, we did a couple of other things different too. We brought a couple of sea kayaks with us, and instead of working our way southward down the coast, like we did on our last trip, we took I-5 down to Cape Perpetua then worked our way north, so we ended the drive closer to our Bellingham, Washington home.

One of my big goals for this trip was to paddle my sea kayak out into the wide open Pacific Ocean. On our second night we camped near one of Oregon’s many enormous white sand beaches, at Beachside State Park.  Mary was kind enough to help carry my kayak to the water’s edge and smart enough to leave hers in camp.

I paddled out into the breaking waves, surfing a few breakers towards shore. Eventually, I gained enough confidence to crash through the breakers, which lifted my bow and soaked my face. After a good deal of effort, I found myself out past the breakers and in gentle rollers of the open ocean. I raised my paddle and yelled, “hooyah!” After a few moments of enjoying the Pacific, and letting my breathing slow down, it was time to get back to my no doubt anxious wife, waiting on the shore.

A few sweep strokes brought my kayak around facing shore, so I could survey the situation. The safer thing to do would have been to follow the back of a wave, but I love to kayak surf. I have to admit most of my surfing had been in a whitewater kayak, on whitewater rivers, so surfing with a 17’ sea kayak was a bit new to me.

I watched for a good size wave and started paddling forward. The roller started growing beneath me. With a couple more quick strokes, I was suddenly accelerating fast and headed down the face of the wave. The nose of my kayak started to bury, which could lead me to going end-over-end. I lifted my knee and angled the kayak, shedding the water. About then, the wave started to break, crashing into the stern of my kayak and pushing it sideways, in to a broach. I leaned into the wave and started to side surf, bracing with my paddle buried in the wave. This works well in a flat bottomed whitewater kayak. Apparently, with a sea kayak, you have to use a lot more lean. The shallow v-shaped keel on the bottom of my kayak caught, and next thing I knew I was upside down in the foamy part of the wave.

I had practiced rolling all summer, but short of breath and being dragged through foamy surf, I felt I was not in a position to roll. My thought was, I want to get out of this kayak. Over anxious, I yanked off my sprayskirt and clambered to the surface. At least I had enough sense to keep ahold of my kayak and paddle.

Now what? None of the assisted rescue techniques I’d practiced would work, since there were no other kayakers with to assist me. As to the self-rescue techniques, I’d already blown the roll. The next fastest is the Cowboy Rescue, which involves straddling your kayak like you would a horse. I threw my leg over the stern of my kayak, but a wave immediately broke over me, filling the cockpit of my kayak. The Paddle Float Rescue requires inflating a float, slipping it over your paddle,… No way I had time for all that.

My last option involved grabbing the stern of my kayak and letting waves pull the kayak to shore, dragging me along behind. That worked pretty well. Soon, I found myself in chest-deep water, able to walk behind my kayak. Almost into waist-deep water, I suddenly stepped over a drop-off, and current swung my kayak around behind me, trying to drag me back out to sea.

Shit! I’d stepped into a rip current, where all the water washing into shore is carried back out. Usually, the best thing to do is not to fight the current, swimming parallel to shore until you’re free of the rip. I was so close to shore that I swam hard, side-stroking, with my kayak dragging behind. Out-of-breath, I finally stumbled up to a very anxious Mary, waiting on shore. I’m very glad she didn’t jump into the rip current, trying to rescue me.

There were three things I wish I’d done differently, that I want to share with you, in case you’re ever caught in this situation.

Or the wiser choice might have been to do like Mary did and enjoy the ocean from the beach.

Another Kayak Adventure, at Beaver Creek

The next day, Mary and I set out by kayak into the Beaver Creek estuary at Brian Booth State Park. Paddling through marshy channels, we had close encounters with lots of ducks, kingfishers, egrets, cormorants, a hawk, and at least three turkey vultures circling over us. 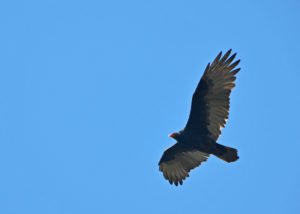 At our next stop, Yaquina Head, we almost left after a quick look at the lighthouse, which we’d already seen on our earlier trip. Instead, we decided to descend the stairs to Cobble Beach. We were very glad we did. Gray whales were spouting, as they passed back and forth, just beyond the rocks. Watching carefully, we started spotting little clouds from whale’s blowholes as they came to the surface to breath, farther out to sea. The cove had all sorts of action, with crashing waves, sea lions and a variety of birds. If we’d had the time, I could’ve stayed there watching and taking photos for hours.

An Oregon coast trip wouldn’t be complete without walking Cannon Beach to Haystack Rock. On this trip, serious waves pounded the shore, demonstrating the power of Mother Nature. Cannon Beach is gorgeous, as seen from our next stop, an overlook at Ecola State Park.

We also visited Ecola’s Indian Beach. A small corner of the beach held dry sand, so we checked the tide table and found the tide had just turned. We threw down a blanket and napped in that one dry spot, listening to the pounding surf and feeling a bit apprehensive about the sneaker wave warnings. Fortunately, we were never woken by a wall of water engulfing us and dragging us out to sea. 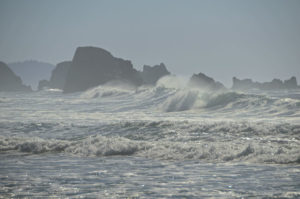 Last Day of the Trip

We spent our last night at Fort Stevens State Park, like we had the first night of our earlier trip. The next morning, we came across a small elk herd on the way to the historic military remnants. The fort’s history dates back to the civil war, guarding the mouth of the Columbia River from the British. In 1942, a Japanese submarine fired 17 shells at the fort, making it the only military installation in the continental US to take enemy fire during WWII.

Our last stop was at the longest beach in the world, Long Beach, Washington, where you can drive for miles and find a very secluded spot. We had work to get home to, so we just took a quick look.

This may have been the last day for this trip, but we decided it won’t be our last trip to the Oregon coast. With spectacular beaches, stunning scenery, and lots to do, we’re going to make sure the Oregon coast is a vacation destination that we get back to every few years.

Be sure to visit my report on our first trip to the Oregon Coast. 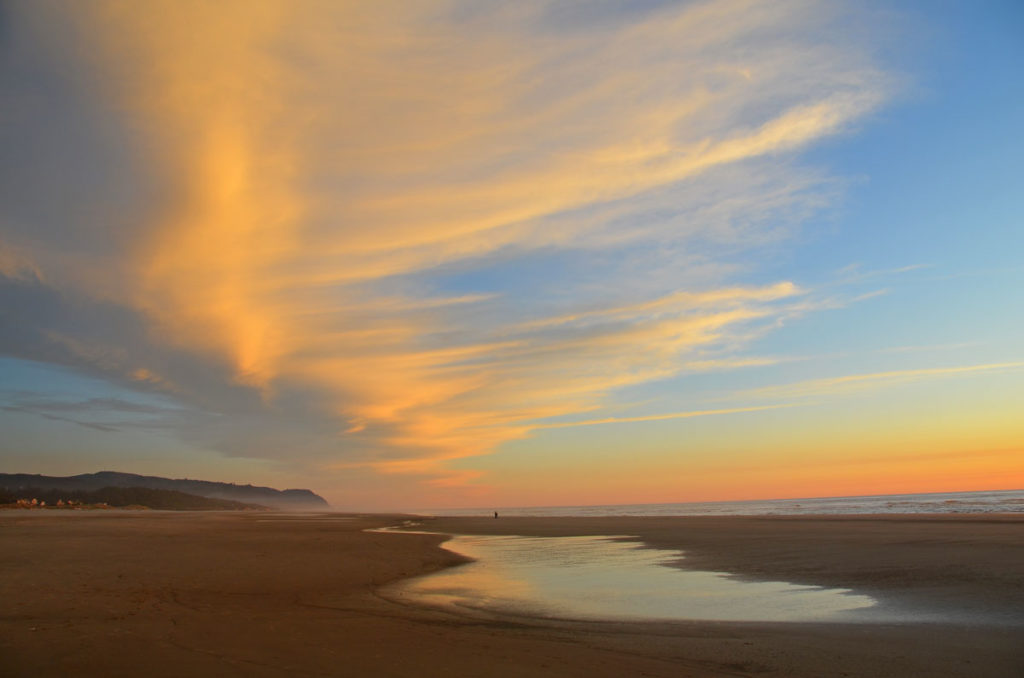 Sunset on the Oregon Coast

2 thoughts on “The Oregon Coast Revisited”