For a profoundly satisfying experience, venture deep into nature and immerse yourself in her solitude. ~Curt Remington

The above words came to me while writing a speech about our trip to Desolation Sound. In this blog, my goal is to share our trip with you and to encourage you to venture into nature for your own profound experience. 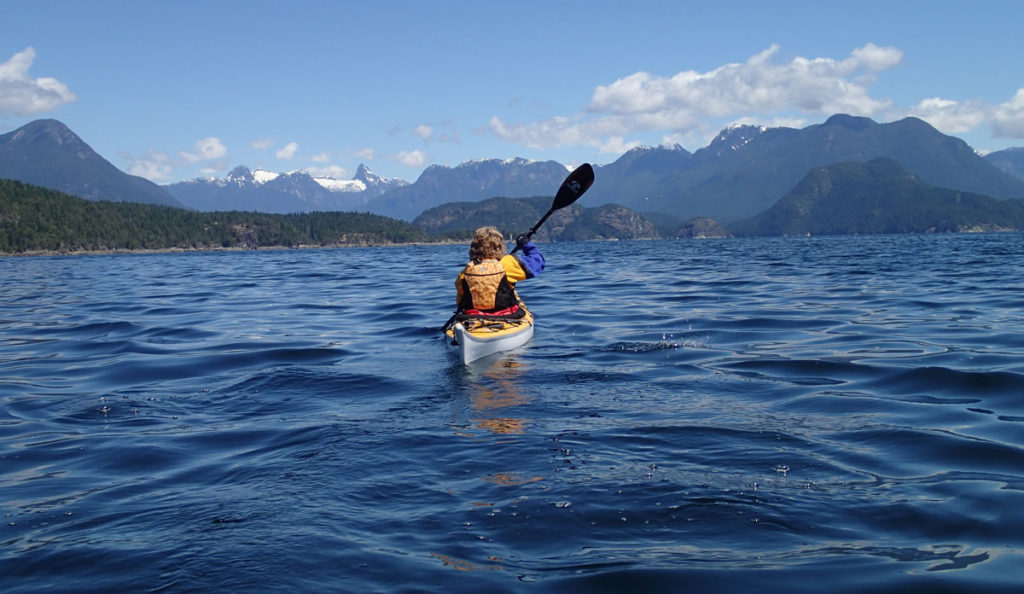 Our kayaking adventure actually started with a very scenic drive and two ferries, bringing us to the northern end of British Columbia’s Sunshine Coast. In fact, we spent our first night in the historic Lund Hotel, across the street from a marker for the northernmost end of Highway 101, the longest highway in the world. The other end is 9312 miles south, in Castro Chile. Lund may be the end of the road, it is also the “gateway to Desolation Sound,” and a rest stop for boaters headed up the Inside Passage. 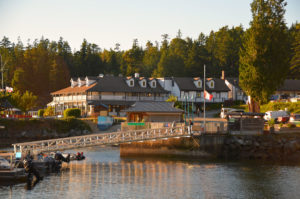 For us, Lund is where we left civilization behind, first thing the next morning. We stuffed containers filled with gear, food, and water into our kayak hatches, donned drysuits, sprayskirts and pfds, then paddled out past docks and boats. Lund is open to Georgia Strait and is fairly exposed to a westerly wind, and we definitely had a westerly wind that morning. The bow of my heavily loaded kayak occasionally plowed deep into a wave, sending a good deal of water up the deck and into my midsection, making me glad I had a drysuit.

My real concern was Mary. She is not a fan of big waves and wind, and she had been worried about what kind of conditions we might run into. This didn’t seem like a good way to start. I nervously kept an eye on her as she kept paddling onward, wide eyed and looking tense but handling her kayak well. She’s a much more competent kayaker than she gives herself credit for. After a few miles of hard work, we reached shelter behind the first of the Copeland Islands. What a difference!

Through the Copeland Islands, we hugged the shoreline, minimizing wind and getting an up-close view of the rocky shoreline, the evergreen forests, and the fascinating scenery below the water’s surface, where schools of minnows darted and jellyfish slowly swam in pulsating contractions.

By the time we reached the north end of the Copeland Islands, the wind had dropped significantly, and we’d only seen a few boats speed by. We started paddling more direct routes, crossing large expanses of open water as we made our way around Sarah Point, stopping for lunch at Feather Cove, and continued the last nine miles to the Curme Islands. Our direct route shaved off miles but also put us a considerable distance from the nearest shoreline. By the time we reached the Curme Islands, we’d covered about 15 miles, more than enough paddling for Mary in one day. I was so anxious to explore, that I set out and kayaked more, once we got camp set up, while Mary took a much-needed nap on the deck.

As to our camp, we arrived on a Thursday, expecting serious competition for one of the nine campsites (deck platforms) on West Curme Island. Instead, the only other people on the island were one other couple and a very quiet and private single woman, in her own campsite. After the first night, the other couple left, leaving just three of us on the island. Eventually, the very solitary woman warmed up to us, at least a bit. I would bet she didn’t appreciate that we’d picked the campsite next to hers. We had chosen it based on the view, expecting the other campsites to fill up too. If we’d known it would just be the three of us, we would’ve gladly camped farther away from her. Oh well. We were quiet. She was quiet, and there was roughly 100 feet of trees and bushes between us. We really didn’t notice each other much.

One of the Curme Islands, across from our camp

By the way, the Curme Islands are beautiful. I have no idea why George Vancouver named the area Desolation Sound, unless he arrived at the most depressing point of a long winter. We had beautiful weather, stunning scenery, and apparently we’d arrived (late June) just before the crowds showed up.

On our trips, we often rush from place to place, trying to see as much as possible. In the Curme Islands, we stayed in one place for a few days and really started to relax, meditating and connecting with the beauty around us. We sat and watched the changing light on distant mountains and islands. We walked and kayaked around the nearby islands, encountering some of the wildlife, like eagles, seals, hummingbirds, red mergansers and seals.  The water clarity was so good that we focused more on undersea life, including shiners, minnows, starfish, more jellyfish, crabs and lots of oysters. We had passed an area where humpback whales had been breaching, but they didn’t cooperate for us. When I did spot creatures underwater, I just set my waterproof camera on video and held it under my kayak, aimed in the right direction. While on the island, Mary took the camera and sat along the shore, watching and filming crabs and fish scurrying about in the shallows. 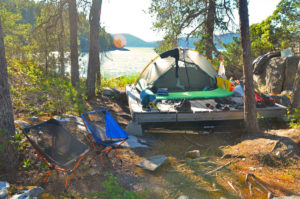 On day four, we paddled along Bold Head, into Tenedos Bay, lined with steep cliffs. At the end of the bay, we hiked up to Unwin Lake for a freshwater dip, rinsing a few days’ worth of salt off. We also restocked our fresh water, ending up with more than we needed.

With much more to explore, I set out alone that evening and paddled up a narrow channel between Bold Head and Otter Island, east of the Curme Islands. As I emerged from the channel, I looked beyond more islands to the east, up at the Canadian Coastal Mountains. The vastness and rugged beauty, with many inlets and passages to explore, beckoned me.  We simply didn’t have time on this trip, and I knew Mary was probably watching for me anxiously. I turned my kayak back towards the Curme Islands and took gentle paddle strokes as I skirted Otter Island, watching for fish in the shallows.

Our time in nature was truly rejuvenating, reminding me of a quote in my book, Simple Meditation.

In nature, we’re more aware of and are connected to our surroundings in an expansive way. Our senses open up to the damp smell of the forest, the cool breeze on our skin, the layer of pine needles beneath our feet and the orange and pink clouds of the sunset. Spending time in the outdoors connects you with the more primal you, the one that understands without analyzing. By making this connection, you can return to your usual environment more at peace and aware.

After a few days in the Curme Islands, it was time to leave. We broke camp early and started back towards Lund, however we decided to camp in the Copelands, breaking up the return paddle. Mary had no interest in another 15 mile day, and we both looked forward to a more relaxed pace. On North Copeland Island we pitched our tent on a south facing deck with spectacular island views and views of the distant mountains of Vancouver Island, to the west. Of the ten campsites, only one other was occupied, giving us a great deal of solitude. We felt incredibly blessed to have so much beauty to ourselves. After dinner, we hiked to the north end of the island to watch the changing water, as the tide filled channels and the stunning sunset painted the sky in shades of blue, turning to golds and shades of orange.

Sunset in the Copeland Islands, BC

On our drive home, we camped at Porpoise Bay Provincial Park, feeling reluctant to end our vacation.  During the drive, I contemplated the many kayak destinations along the British Columbia coast. Desolation Sound is on the sheltered side of Vancouver Island, providing for calmer conditions, warmer water, and sunnier weather than the exposed west side of Vancouver Island. I definitely planned to return to Desolation Sound, to explore more of those areas we didn’t have time for. On our next BC kayak trip, I’d like to visit the wide open Pacific, like we did on our Oregon Coast trip.

We found our time in nature to be profoundly satisfying. If you plan to do some venturing too, the BC coast and Desolation Sound is a wonderful place to do it.