What characteristics make for a wonderful vacation destination? I suppose the answer might vary depending on the person, but the Canadian Rockies has a lot to please just about anyone.

My wife Mary and I spent nine glorious days camped there this summer, and I think it was the best choice for us. We’d planned to visit Italy, but we came up short on frequent flyer miles. Our next thought was to hike a 74 mile section of the Pacific Crest Trail. A drought brought forest fires and water shortages to Washington’s high country, so two weeks before departure we switched our plans to Banff and Jasper National Parks, along with Mt Robson Provincial Park.

Not knowing better, we scheduled our trip to start during Canada’s busiest camping weekend, Civic Holiday or “August long weekend.” We figured it out when we couldn’t find a camping reservation anywhere near Banff. Lucky for us, our time freed up and we departed a couple of days early, just in time to grab one of the last first come first serve campsites at Castle Mountain Campground. Those that weren’t so lucky got to pitch their tents a few feet from each other on the edge of a big gravel parking lot (overflow camping). 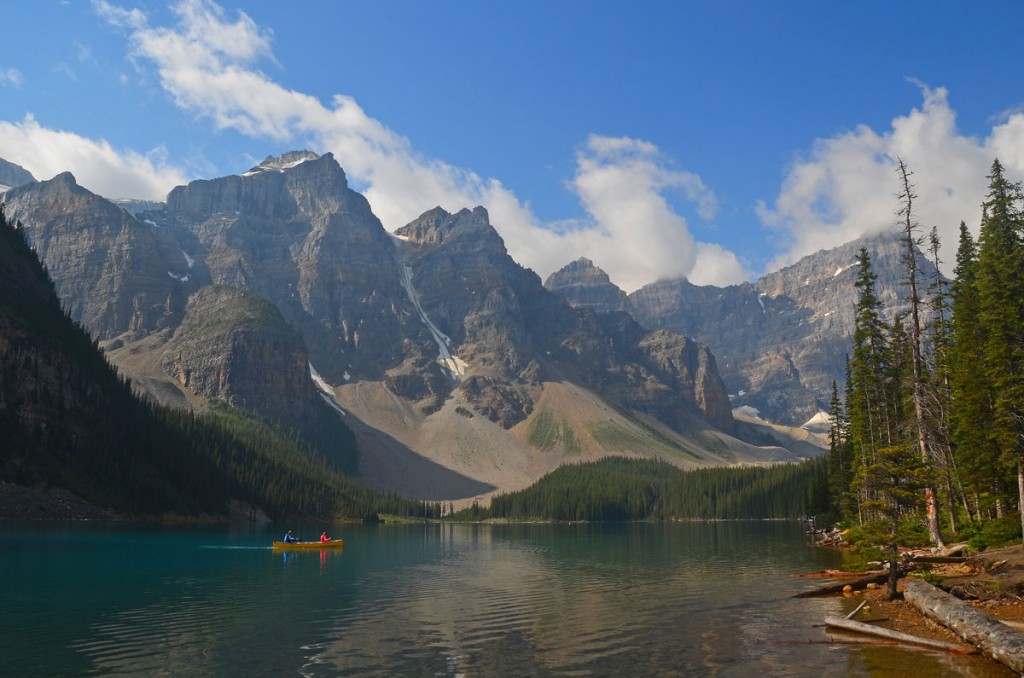 For thrill-seekers, the Rockies have mountains to conquer, rock faces to climb, and whitewater rivers to raft. Even backpacking in the mountains holds a number of dangers. There are cliffs to fall off, storms that can move in quickly, potential for getting hypothermia, getting lost, and of course, there are bears. We camp regularly in the North Cascades, which has lots of black bears but few grizzlies. The Rockies have a lot more grizzly bears, and grizzlies can be big, mean and ornery. In fact, Banff and Jasper National Parks have frequent trail closures, an electric fence around the Lake Louise campground, and lots of bear boxes for food storage. I kept bear spray close by and heard from a fellow backpacker at Mt Robson that he actually used his. If you’re going to Banff and want to see bears, try the Lake Louise Gondola. 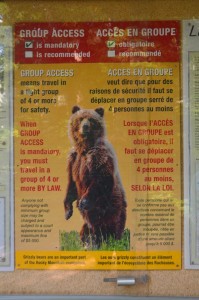 We never got around to riding the Gondola, but we did see a couple of bears. They left us alone and seemed far more interested in doing their own thing. The biggest danger we actually faced was our long drive across British Columbia on Highway 1, the major east-west truck route across Canada. We’d left in early afternoon, and I was road weary and still driving past dark, on a section of Highway 1, that winds through mountains with only two lanes. This meant temporary blindness as semi headlights came at me at a combined speed of over 220 kilometers per hour. To make matters even more exciting, we came across plenty of warning signs for deer, elk, moose, and bighorn sheep.

We were very relieved to reach the Husky Travel Centre truck stop in Golden, BC, where we found semis, and a few smaller rigs, parked for the night in every available spot for blocks in both directions. Eventually, we found an opening, crawled into the back of our pickup, and slept until 6 am.

I think we heard just about every language and encountered nice people from all over the world. If you’d like to practice your language skills, this could be a good place to do so. 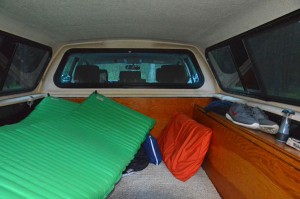 French seemed to be almost as common as English. I realize French is the other official language of Canada, but I thought most French speakers were in Quebec. At Lake Louise, we encountered a teenage daughter yelling at her dad about a picture of her he apparently had threatened to post on Facebook. She started her tirade in English then switched over to French, when things really got heated. I chuckled and was glad my youngest of three daughters is now 20 and past that stage.

We also heard a good deal of what I suspect was Chinese (Mandarin), especially while camped in the Lake Louise campground. Our campsite sat in very close proximity to the neighboring site, which held two large tents and lots of young Asian children. The weather continued to drizzle, so we didn’t bother setting up any gear. We just sat in our truck and listened to our neighbors chattering, joking in Mandarin and laughing loudly until long after we’d climbed in the back to go to sleep. I actually thought it was great that they were having so much fun, and exhaustion put me to sleep quickly.

Home Away from Home

The next morning, the neighboring kids started in again early, until their parents noticed us climbing out of the back of our truck. Up to that point, since we had no tent, they must’ve assumed it was just an empty truck sitting next to their campsite. When we wished them good morning, they just smiled nervously and waved. Until we left that morning, they kept shushing their kids.

People come from all over the world to see some of the best scenery in the world. We love to hike, and there is some fantastic hiking in the Canadian Rockies. I have to admit though that there is an awful lot of spectacular scenery that can be enjoyed without getting far from your car. 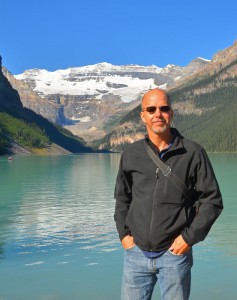 Our first day in Banff, we had clear blue skies, so we decided to cover lots of ground and shoot lots of pictures. We visited Lake Louise then travelled up the Icefields Parkway to Bow Lake, Peyto Lake and finished off the day with a stop at Moraine Lake. That’s a lot of alpine lakes in one day, but each is unique, with a different shade of water, varying from deep blue to milky turquoise.

On our second day in Banff, we got up early and headed back to Lake Louise for a 10 mile hike that brought us high into the mountains above the lake with stops at two teahouses. The Lake Agnes teahouse is a solid log and stone structure sitting at the edge of the lake’s outflow, with a babbling creek on one side and a cascading waterfall dropping off behind it. 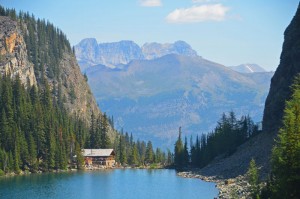 At the second teahouse, Plain of the Six Glaciers, we spent $30 (including tip) on two pieces of blueberry pie and a “mocha coffee,” which tasted like a mixture of instant cocoa and coffee. The price almost seemed worth it when we considered employees had to haul ingredients in by backpack and prepare everything without electricity. Besides, the glacial view was fantastic.

During the trip, we hiked a variety of trails and covered more than 60 miles with elevation gains of over 10,000 feet, a good deal of hiking for a sight-seeing trip. We chose our hikes carefully, with exceptional scenery as the highest priority. I do like to take good pictures. The most scenic hikes are also the most popular, so there can be a lot of people on these trails. To escape the crowds, we got up early (5:30 to 6:30 am) and hit the trail hours before the less serious hikers. Less serious hikers also don’t tend to hike more than a few miles, so you lose much of the crowds by choosing longer hikes. 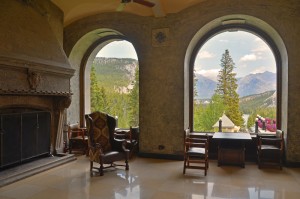 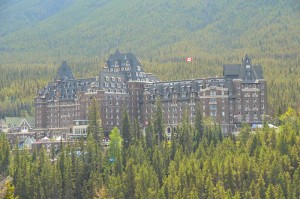 We decided to take a break from hiking and drive our truck, which also served as our home, into Banff to see how the other half vacationed. At $600/night, the Banff Springs Hotel was a bit beyond our budget, but it was well worth wandering around in. It was built in 1887, in the Scottish Baronial style, and looks more like a castle than a hotel. The interior has an old elegance that definitely reminded me of The Shining or Titanic. Extensive patio areas to the rear provide wonderful places to enjoy the mountain views. In fact, a wedding was taking place there. 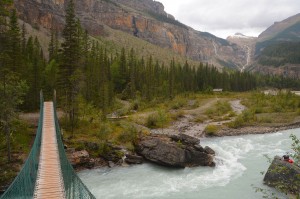 Rangers cabin in Valley of 1000 Waterfalls

Our backpacking trip to Berg Lake, in Mt Robson National Park, brought us deep into a very beautiful and rugged wilderness area. We departed early, in a light rain, and the rain kept up all day. This turned out to be a great opportunity to learn of the shortcomings in our gear, which managed to get very wet. We now have new hardshell jackets, gloves, and a tarp. At Berg Lake, we reached a crowded day use building with a woodstove and lots of wet gear hanging from the rafters, nails, and anywhere else you could put wet clothes. We leisurely cooked dinner while our gear dried.

Mt Robson, the highest peak in the Canadian Rockies, towers over the lake. Unfortunately, low clouds and fog blocked the view our first day. The next morning we woke to more low clouds, so we packed early and were on our way back out. A brief break in the clouds and a message from a spirit guide told us to stick around for a few hours, so we turned around and made our way further up the valley. The low clouds lifted and a little sun broke through, making for a stunning 14 mile hike out past Berg Lake, down through the Valley of a Thousand Waterfalls, alongside Kinney Lake and the Robson River.

What Makes a Great Vacation Destination?

Like I mentioned, it may depend on the person, but here are some of the things that people look for in a wonderful vacation destination:

We had a great time in the Canadian Rockies, and I’ll bet you would too.