We all have times in our life when we could use love, support, guidance or protection. A wolf recently brought me the message that I’m not alone and that my spirit guides and totem animal are nearby, bringing me these gifts. 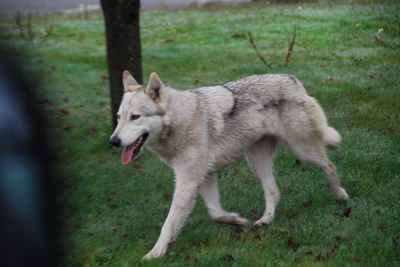 Gray Wolf- That’s my car mirror on the left side.

Personally, I’m in a place where I could use all of these. Two months ago, I had surgery for prostate cancer. Although it looks like I’m free of cancer, the experience stirred up a whole lot of anxiety and issues, some of which have nothing to do with cancer. I’ll write about them sometime, but for now I’d just like to tell you about Wolf, my totem animal.

So how did a wolf get me that important message? My wife and I were driving near the edge of town, in Bellingham, Washington. A gray wolf trotted out of the woods, so we stopped the car in the middle of the road. The wolf circled our car, occasionally looking up at us. Then, it trotted to the edge of a parking lot, turned and looked at us again. Eventually, it crossed the parking lot and continued towards the wooded hillside at the edge of town. I immediately sensed this was a message from my wolf totem animal, reminding my that he’s nearby. Later, when both my wife and I did some clairvoyant reading, we got the more in-depth message regarding love, support and protection.

The night before, I’d done an hour-long interview on the Spiritual Broadcasting Network, briefly talking about my wolf totem animal. I knew that this had to be far more than coincidence. I also need to mention that wolf sightings are quite rare in Washington, especially wolves that circle your car.

When I have seen and communicated with Wolf, my totem animal, it has been clairvoyantly, especially during vision quests. In other words, I’ve seen his image with my eyes closed, using my third eye’s psychic vision. In speaking with a variety of people, I’ve heard many say their experience with totem animals has been through seeing an actual animal, or even coming across a picture of one at an especially significant time.

For hundreds of years, Native Americans have ventured into the wilderness, seeking their totem animal for direction in life. Their totem animal usually took the form of a vision, like my psychic images during vision quests.

In communicating with Wolf, I’ve learned that totem animals are advanced spirits, much like guardian angels and other spirit guides. They take the form of an animal, or call on one, to get a specific message across. For me, the image of a wolf conveys a sense of strength and protection.

You may already be aware of your totem animal too. Are you strongly drawn to a species of animal, collecting pictures or small statues, like the wolves and owls (my wife’s) hanging around our house.  Have you had an encounter with a wild animal and sensed they had a message for you?

Watch for these experiences. You’ll usually get a sense that the animal’s behavior is unusual and significant. You might also consider meditating and contacting your totem animal or spirit guides. This is especially effective on a vision quest trip. Having such an experience can enrich your life and bring you a deeper sense of spiritual connection.