I left the house at 4 am, thrilled to finally go on a multi-day Idaho raft trip, especially one on the Snake River’s Hells Canyon. The canyon is North America’s deepest river gorge, at 7,993 feet, almost 2,000 feet deeper than the Grand Canyon. The USFS website says, “the Snake is a big river with power many river users have never experienced.” Yep, the volume of water we’d be rafting through was more than I’d experienced. Before we moved west, five years ago, I’d bought a raft, frame and all the necessary gear to take my family on multi-day raft trips. Since that time, that gear’s sat in a pile in the garage, largely due to my failure at convincing my family that rafting is a good idea. 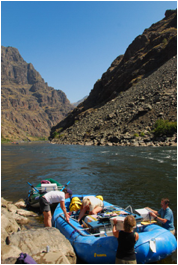 For that very reason, I’d be alone, while my friend Kerry brought his wife, sister and daughter. I pulled into a campground on the Snake River and waited in the 100 degree heat. They arrived soon, and we shared stories from our recent adventures, like my trip toAlaska and Kerry’s mountain climbing trips. We had become friends years earlier, through whitewater kayaking, and we’d climbed Mt Baker together. Along with catching up, we discussed our next day’s plans for rafting Hells Canyon. Kerry brought a 16 foot Maravia raft and lots of gear, much more than my 13′ Aire Super Puma could hold. Maybe, a bigger raft and more gear, was the secret to convincing my family to go. Then again, it might just make for a bigger pile in the garage.

At the put-in the next morning, inflating and loading the rafts became chaotic, as outfitters competed for space, working to get their flotillas of rafts and gear into the water. The permit system only allows for a few groups to enter the river each day. Unfortunately, they all seem to do so at the same time.

I threw my gear together as quickly as possible, feeling apprehensive about rowing through big, pushy class IV rapids. The rangers at the put in told us some recent, inexperienced rafters had flipped eight times. Two of the hardest rapids, Wild Sheep and Granite, would arrive within the first six miles.

My whitewater experience had been in maneuverable kayaks, or paddling a raft with a number of people. Rowing a raft loaded with gear was a brand new experience. Would my gear stay together, if the raft flipped? Maybe I’d learn fast and keep it upright. Kerry and his family looked up from their gear organizing, so I just smiled, trying to look confident. Once they had their massive pile of gear strapped in place, we set off down the river.

Within a half mile, we reached a class II rapid, and I learned an important lesson. A raft with gear, in a pushy river, does not respond anything like a whitewater kayak. I found myself rowing frantically, while the river still pushed me into the largest waves and holes. New strategy! I would have to pick a line through a rapid that involved very little course correction, once the whitewater started.

When we reached Wild Sheep, one of the class IVs, I learned another technique. The raft crested an eight foot wave, a bit diagonally and started to flip. I jumped out of my seat and threw my weight against the higher raft tube. That one was close!Eventually, I also learned that rowing forward, and proper timing, help keep you upright in large waves. Now that I think of it, that usually worked in

Along with powerful rapids, the river’s enormous eddies and whirlpools kept us alert. If you wandered into

an eddy, the river pulled the raft upstream, sometimes faster than you could row. By watching the currents, and working with them, the rafts continued in the right direction.

That evening, all that gear the big raft carried made camping downright luxurious. They had real beef and potatoes, cooked at one table and served at another, along with a variety of wines. They even had a selection of appetizers. Lucky for me, my friends are generous. I had brought more of that freeze-dried food that’s been sitting in my closet for years. Kerry’s family is also very friendly, welcoming and are considerate listeners, asking questions about psychic readings, past lives and the spirit world. Conversation stopped as a young eagle circled overhead, then dived at a fish in the river.

Overnight, the river level dropped significantly, leaving our rafts high on a gravel bar. For my light raft, that meant lifting together. For the heavily loaded raft, that meant unloading an enormous dry box and cooler, then moving the raft and reloading. Finally, we set out and made our way to the first rapids of the day. While we scouted, a group of bighorn sheep stood, watching us from the cliff above.

The second class IV that day had a group of big holes at the top, on the right side, then more big holes on the left, towards the bottom. I stood on a boulder, trying to find a path that didn’t involve hitting a big, churning hole. I couldn’t find one, so my plan was to hit the hole hard and throw my weight around, hoping the raft kept going. At this point, I mentioned to my spirit guides that help would be appreciated. Once in the rapids, I skirted the top holes, hit some waves, and the next thing I knew, I was in the clear. What happened to the holes at the bottom?  I’m not sure if I somehow missed them, but my theory goes like this: In a big surging river, a hole can be a wave one second, then turn back into a hole the next. It may be that my guides saw to it that they did just that, before I hit them. For whatever reason, I managed to make it through all the rapids, still upright. 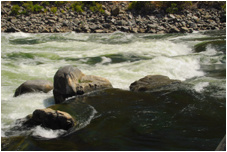 Our next night’s camp had a swimming beach, trees for shade and beautiful views of Suicide Point, a tall cliff across the river. On most rivers, it’s the rapids that have morbid names, like Jaws, Boatbeater, Gore and Slaughterhouse.

With only seven miles, and no major rapids ahead, I left my friends early morning, hoping to make it home at a reasonable hour. Each day, we had only encountered a few other boats, due to the permit and lottery system. As I floated alone, and looked up, the remoteness and rugged beauty of the canyon truly inspired me. The eddies even settled down enough so I could meditate while I drifted.

At the Pittsburg Landing takeout, I felt a great sense of relief in finding my truck waiting, with a third of a 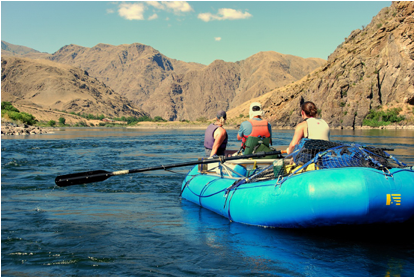 tank of gas. It had been close to full, when I had left it at the put-in, along with a key for the shuttle service. As I drove up the steep, winding gravel road out of the canyon, I realized how they’d used so much gas. The drive to get my truck there had no doubt been a long, steep and winding one.

After seventeen miles, I came to an intersection and realized that I was now in a remote part of Idaho and didn’t have a decent map. My gas gauge kept dropping, and there was no cell phone reception. I should have meditated and asked a guide for directions. Instead, I guessed at the next few turns and wound up miles down another winding backroad, with Highway 95 visible on the hillside above me. Tuning into intuition, I backtracked and my next turn took me to the highway. Soon, I ended up in a town with gas and phone reception. Mary, my wife, gave me directions for back roads halfway across Washington, a much quicker route than heading straight for the freeway. In fact, I made it home in time to unpack and spend a few hours sharing my adventures with her and working to convince her that raft trips are a great idea.