Since ancient times, people have flocked to islands and beaches as a place to escape and relax. A beach combines the sun’s warm rays, the sand’s connection to the Earth, the soothing sound of waves and vast expanse of ocean, with its constantly changing surface and endless mysterious treasures. Islands, off on their own, surrounded by water, provide a sense of truly getting away from our daily routines.

Living just outside Bellingham Washington, my day-to-day errands regularly bring me within view of the San Juan Islands. Actually, I sometimes take detours to put them into view, so I can imagine myself out boating or kayaking, exploring and relaxing in the many coves and bays.

After my North Cascades trip, I decided that I needed more material for my book, Simple Meditation. I’m still working on a chapter covering walkabouts and vision quests, so I decided to get out and do more of the stuff you do on vision quests. What a great excuse for escaping to the islands for three days, huh? 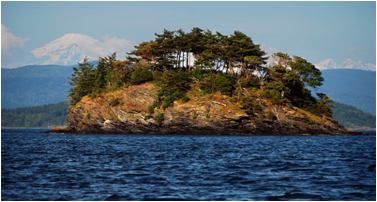 I debated loading my gear into a kayak and paddling to a quiet beach on Cypress Island. Upon further reflection, I concluded that with my Mirage 232 powerboat, I could get there faster, plug my laptop in, and get more writing done. Didn’t I mention in that earlier article, that you can be flexible on a vision quest? For some reason, my wife, Mary, questioned my new concept of a vision quest.

“You’re bringing food? A laptop? A powerboat? And your going to sleep in the boat instead of on hard ground?”

If I was going out to the San Juan Islands without her, I should be suffering. Actually, considering that she had to stay home and work, she was pretty supportive. The trip would largely be some quiet time to concentrate on writing. Besides, in some semblance of roughing it, I brought a bunch of old backpacking food for dinners.

With my gear loaded, including a whitewater kayak strapped on the back, I set out for Cypress during a small-craft advisory, driving into pounding seas for most of the twenty miles. The winds were 15-25 knots, so it wasn’t really that bad, just a tad on the rough side for a 23′ boat. At a place called Viti Rocks, strong tidal currents created a powerful rapids, with standing waves, whirlpools and water converging in weird and mysterious ways. As a fan of whitewater, I couldn’t resist stopping to feel the way the surges pushed the boat from side to side and tried to spin it around. In my little kayak, the surges and edd-lines would have been downright nerve-wracking.

After a little fun bobbing around in the rapids, I continued on to Cypress and tied to a moorage buoy. The island is secluded, with only 40 residents and 5,500 acres, most of which is steep evergreen forest. That night, the wind occasionally howled and swung the boat in a wide arc around the buoy, while small rolling waves rocked it. With doubled-up lines to a very solid buoy, I felt confident in my safety. The wind and waves was just enough to remind me that I wasn’t on dry land anymore.

During my second day at Cypress, I paddled my whitewater kayak to shore and hiked over eight miles, up and down forested hills, without encountering another person. Instead, I found a network of trails, small lakes and an old airstrip recently planted with seedlings. Returning to my boat, I found a sailboat moored next to me, with loud, fun-loving children. This just didn’t seem conducive to meditating and writing, so I moved to the north end of the island and moored next to a very quiet old sailboat. I spent most of the rest of the day writing in notebooks and on my laptop, occasionally stopping to watch a curious harbor seal or to listen to the waves lap at the hull. As evening approached, the clouds to the east cleared, making for spectacular views of Mt Baker and the Twin Sisters Mountains.

While working on the walkabout chapter for the book, I briefly meditated, tuning into the spirit world for advise on a visualization exercise about finding your life’s purpose. The following exercise is what came to me. When you get a chance, please give it a try, tuning into the symbolism of

whatever you see. For example curves or logs in the path may represent obstacles in your life or a steep climb may represent working hard for your goals. If you see a cottage, it may represent that home and family are important, a skyscraper may represent work. If you gently use your intuition, without thinking too much, you may sense the significance of the images that come to you. Much of what clairvoyants do is interpreting the symbols that come to them.

Once you’re situated comfortably and are done grounding and running your energies, visualize yourself walking on a path which represents your life. You can pick the terrain, or just close your eyes and see what come to you. It might be woods or a meadow, along a beach or through a jungle. Soon, you come to an intersection, with three choices in front of you. Do you keep going straight, take the trail to the left or take the one to the right. Make a choice and follow that trail, taking note of what’s around you. Keep going until you feel you’ve reached what you came for. Where did the path take you? Is it a meaningful scene? Are there any buildings? Do you see people or animals? If so, why might they be there? Was the path straight or curved? Did it climb, descend, or was it flat?  How does this place relate to where you came from? What does it say about where you might like to go?  Use your intuition.  What is it telling you?

Sucia Island and Another Passenger

Poking my head out the front hatch, I found another sunny day and an old two-masted wooden boat passing by, with eight rowers and a helmsman. After cold-cereal and coffee, I paddled to shore and found some comfortable driftwood on the beach to sit on while I meditated. The truly easiest form of meditation may be to sit on a beach and feel the sun on your face, smell the fresh breeze and listen to the waves as they roll up onto the sandy shore. The sensations are so captivating that it’s effortless to stay in the present moment. The San Juan Islands seem to have a special energy too, as if you’d feel it even without the sun, breeze and waves. I savored that spot until my conscience told me I should get back to the boat and start writing.

My wife called that morning, (yes, I brought a cell phone too) to let me know that she could sneak out of her clairvoyance class by early afternoon and join me for the last day in the islands. This was getting less and less like a vision quest experience, but I was getting a lot of writing done, and my wife definitely deserved some time off to go boating in the islands, besides I always enjoy her company.

I pulled into Bellingham’s Squalicum Harbor and tied to a dock. Soon, she showed up with her gear, more water and a bag of better-tasting groceries. We motored out of the harbor and made our way towards Sucia. It’s a smaller island, at only 677 acres, but it is very popular with boaters, and for good reason. The island is a state park and has at least six scenic bays, depending on how you count the little ones. There are nine surrounding smaller islands, hiking trails and beautiful views in almost every direction. Arriving on a sunny Saturday afternoon, we found the dock space and moorage buoys in our usual hangout (Fossil Bay) to be taken. Instead, we moored in Echo Bay, the most open and busiest of Sucia’s anchorages.

Looking out at the mixture of sailboats and powerboats brought back memories of the last time we stayed at Echo Bay. That night was four years earlier, in a chartered 36′ tri-cabin yacht. It was the largest vessel I had ever captained, so I felt a bit of stress over the responsibility. That night, an un-forecast wind (or we missed that forecast) decided to kick up from the southeast, the one direction we had no protection from. Waves built up to the four foot range, and the yacht started swinging widely around its anchor. I watched in horror as the sailboat next to us started to do the same thing. Both boats would careen towards each other at the same time, then pull up short at the end of their anchor lines. What the hell should I do?  I debated on letting out anchor line, but then we could swing farther. If I shortened the anchor line, we could start dragging anchor. If I tried to move in the dark, we could hit another boat or not get the anchor set. As I tried to decide, I watched and the two boats always stopped their swing a boat’s length apart. That was a good sign, that the distance stayed consistent. I decided not to complicate matters by messing with an anchor that seemed to be doing its job. Shortly after that, a knot pulled loose and our dinghy blew away. I didn’t have to debate what to do about that one. It was on its own until morning.

A friend, that had been anchored near us, was having even worse luck. His 38′ yacht started dragging anchor until he did run into another boat. At that point, he had no choice but to navigate in the dark between the other swinging yachts and try to reset his anchor. In the process, he accidentally ran over and cut a sailboat’s anchor line. The other boat managed to tie to his stern, while my friend got his anchor reset. I noticed a couple other yachts also scrambling through the dark to get their anchors reset. Echo Bay was quite exciting that night.

By morning, the bay returned to a peaceful calm. I started scanning with binoculars and noticed another dinghy towing ours across the bay. We flagged them down and got the dinghy back intact.

After reminiscing about our previous thrilling Echo Bay experience, I paddled to shore and watched a great blue heron fishing in the shallows along the beach. Echo Bay stayed calm that night, so  we had a peaceful sleep. The next morning, we motored over to Fossil Bay and found space at the dock. Anxious to stretch our legs, we set out on one of our favorite island hikes, a loop trail with clifftop views overlooking Fossil Bay, other nearby islands, Mt Baker and distant Canadian Mountains.  Back at the boat, we had lunch and set out to return to Bellingham, very grateful that the San Juan Island are so close to home. 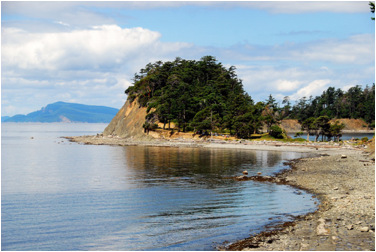 You don’t have to live near the San Juan Islands to enjoy beaches and islands. Beaches and islands almost anywhere are a great escape and wonderful place to rejuvenate yourself. In Minnesota, the islands of the St Croix River were among our favorite haunts, and the local county park beach was a great way to spend the day. As you may have noted in my photo gallery, we’ve also enjoyed beautiful islands and beaches in other parts of the world, like the Mediterranean last summer.

One thought on “Islands and Beaches for Relaxation and Meditation”