Beaches are a wonderful place to take a vacation! There’s the sunshine, sand, spectacular scenery, and soothing sounds of the ocean. We found all of those on the Oregon coast, along with some fascinating sights to visit.

For our last beach vacation, we visited Oahu, spending a day at famous Waikiki Beach in Honolulu. I couldn’t help but notice that there seemed to be a lot less people at the Oregon Coast beaches, although they hold some distinct advantages over Waikiki. To give you a feel for what Oregon beaches are like, I provided some specific description of each, to help you decide on your next vacation destination. 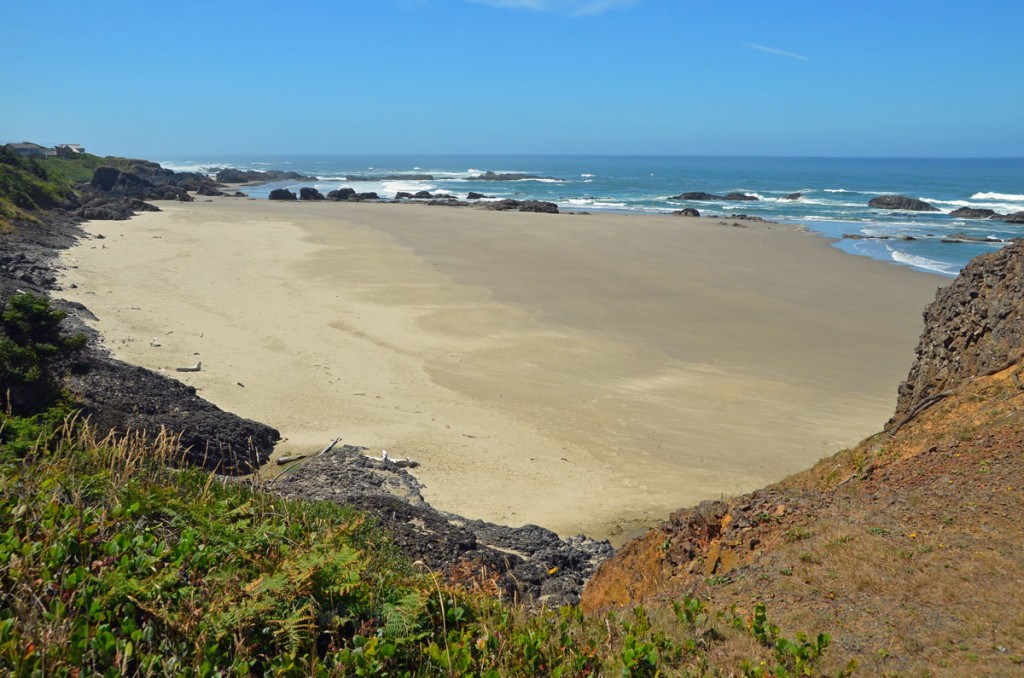 Uncrowded Beach Along the Oregon Coast

Lounging on a beach and actually relaxing is not the kind of vacations that we do. Our vacations are goal-oriented, so we made our way down the coast and crammed in as many sights as we could see in six days. After a long drive down I-5 from Bellingham, we reached Fort Stevens State Park, near the northern end of the Oregon Coast Highway (US Route 101), which we would follow down the coast.

We had just enough time to set up camp and have dinner before our first beach walk. By we, I mean my wife Mary, daughter Heather, dog Riva, and of course myself. At the beach, we climbed a row of soft, white sand dunes and found an enormous expanse of flat beach extending along the coast for miles. Protruding from the sand sat the rusted remains of the Peter Iredale, a 285 foot sailboat that ran aground in 1906.

The next morning, we visited the Columbia River Maritime Museum in Astoria and learned that the area is known as “graveyard of the Pacific,” with at least 2000 large ships that have sunk in and around the Columbia Bar. A variety of conditions come together to make it such a hazard. The currents of the Columbia River, the largest North American River to feed into the Pacific, meet the ocean waves in the area of a shifting sand bar. These features can cause enormous waves to pile up here. The area also has roughly 200 days of fog per year, some of that wonderful variety of weather I mentioned above.

Naturally, these rugged conditions make an ideal training ground for the US Coast Guard’s Cape Disappointment school for rough weather and surf rescue. They venture out with small boats (47 foot motor lifeboats) into huge waves to develop skills which will help them rescue boaters elsewhere. 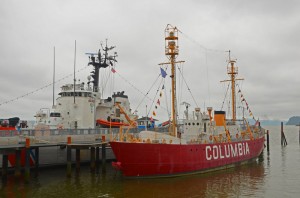 We also toured the Lightship Columbia, a 128 vessel that served as a floating lighthouse for 28 years, marking the entrance to the Columbia River. It has since been replaced by a 42 foot high buoy. A crew of 18 manned the ship, with much of their time spent in boredom, occasionally broken up by terrifying storms.

The Astoria area holds yet more history. Fort Clatsop, just outside of town, is where the Lewis and Clark Expedition spent a long, wet winter before making their way back east. We toured the fort and listened to a buckskin clad ranger describe life at the fort in 1805. 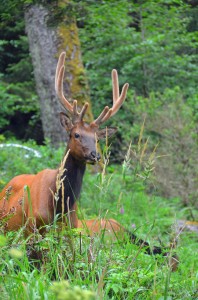 Short on time, we skipped the Astoria Column, a tower with panoramic views overlooking the mouth of the Columbia River. Instead, we made our way down the coast to Ecola State Park and Cannon Beach. What a beautiful place! A blue hole opened up in the clouds, right over Crescent Beach, providing a highly desired photo opportunity. On the way down to the beach, we passed through a small herd of elk, grazing on tall grass. The bull watched us closely, making Mary very nervous, but he left us alone. That evening we camped at Nehalem State Park and walked across dunes to another enormous sand beach. 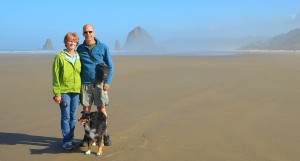 Our action-packed day hadn’t left enough time for a close look at Cannon Beach and its sea stacks including the famous Haystack Rock. We backtracked to a lovely scene with sunshine burning off the morning fog, as waves crashed into the 235 foot high rock formation. By midday, we reached the Tillamook Cheese Factory, where you can sample a variety of free cheeses or buy a 28-scoop ice cream dish, one of each flavor. Three scoops seemed like plenty. Along with enormous beaches, the Oregon Coast has picturesque lighthouses. We visited two that afternoon, Cape Lookout and Cape Meares. At Cape Lookout, we even lounged on the beach for a few hours, like people tend to do on beach vacations.

In honor of my wife’s 50th birthday, we splurged, checking into a hotel and venturing out to find an appropriate seafood restaurant for her birthday. We tried the hotel restaurant, but Mary concluded it looked too “Denny’s like” for her birthday. Next, we tried Pirate’s Cove, a quaint waterfront restaurant, ten miles up the coast. It looked ideal, but upon arrival, we learned that they rely on propane for cooking, and their propane had just run out. Next, we tried a seafood bar/restaurant halfway back to Tillamook. This one leaned more towards oysters, rather than the crab legs that Mary really wanted. An internet search ruled out a few more restaurants that were too expensive, too cheap, closed too early or otherwise weren’t suitable. We finally ended up at Pacific Restaurant, back in Tillamook. Dinner was good, as it probably would have been at any of the other restaurants too. 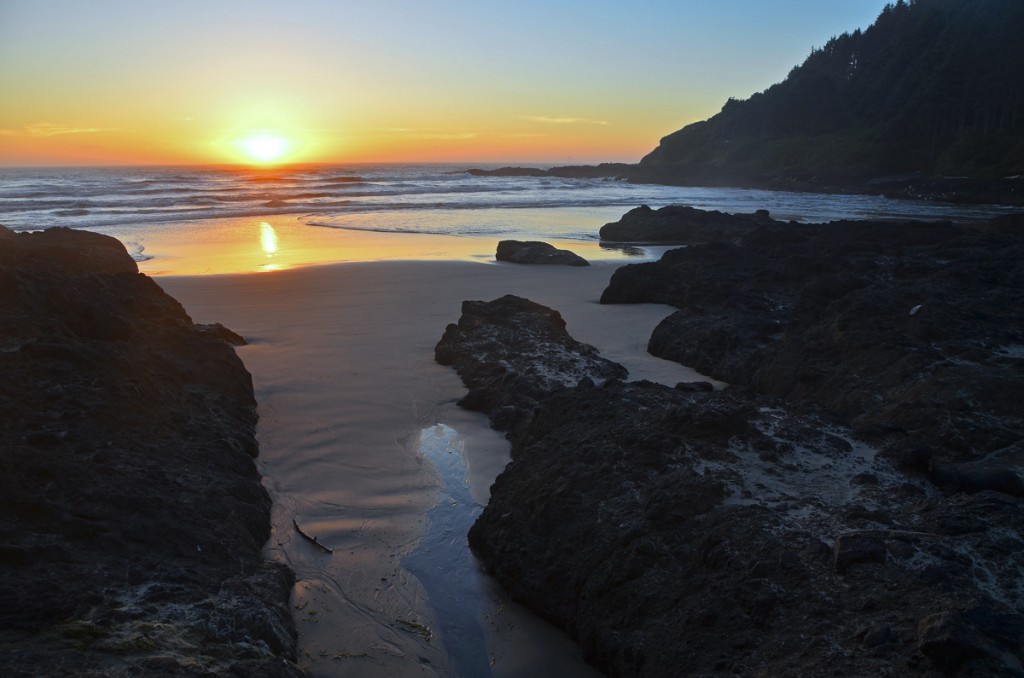 After the hotel’s free breakfast, we started back down the coast, visiting more beaches, another lighthouse, and we arrived at Cape Perpetua in time to grab one of the last campsites. My campsite of choice sat down in the woods, with a stream running through it. Sure, there were a few bugs, not much sun, but a good deal of privacy. My wife and daughter overruled me and chose an open campsite along the road, with a lot more sun. As soon as we got our gear hauled down, we realized that the adjoining campers were extremely close, just on the other side of a narrow row of bushes. Their party included the whiniest three year-old I’ve ever heard, complaining to mom about everything. I just had to laugh! Even my daughter Heather joined in, probably irritating his parents. I’m sure they could hear us too. That evening we hiked to a 500 year old Sitka Spruce and watched a spectacular sunset over the Pacific.

Heceta Head Lighthouse, the last one of our trip, was the prettiest of all, perched on a rocky point with a beautiful beach and bridge immediately to the north. From there, we continued to Florence for lunch and shopping. 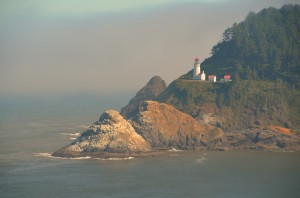 On our final evening, we camped at Jesse Honeymoon State Park, which adjoins the Oregon Dunes, the largest expanse of dunes in North America. They reach heights up to 500 feet and extend for 40 miles to the south. As sunset approached, I climbed up into the dunes, wandering, meditating, and shooting pictures. It seemed more as if I was in a vast desert, rather than on the Oregon Coast.  Wind blasted through the dunes, and the tops were in a constant state of motion with sand gradually filling my tracks. 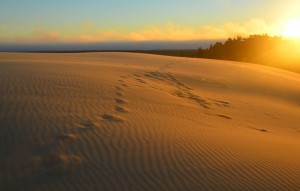 It was here, meditating in the dunes, that the contrast between the Oregon Coast and Waikiki occurred to me. If you appreciate the wonders of nature, enormous sand beaches and spectacular scenery, consider a trip to the Oregon Coast. On the other hand, if sunburn, crowds, and designer shopping are your thing, Waikiki may be a better bet.