According to Hiking the North Cascades, Copper Ridge is “one of the few trails in the North Cascades that stays above timberline for a significant distance, and along its length are superb mountain views.” Those words were enough to convince me that I needed to make this 27-mile roundtrip trek deep into Washington’s North Cascades National Park. Snow stays late and comes early to the high sections of the Cascades, so there is a short hiking season. Lucky for me, a clear trail, free time, and wonderful weather all fell on the same weekend. The only thing missing was a high demand camping permit. There are only eight campsites spread out over the 10-mile long ridge. My wife, who’d opted not to go due to dog-sitting issues, did drive two hours to the Glacier, Washington ranger station to grab one of the last two permits. She’s very sweet, or else she really wanted to get rid of me for three days. Just kidding! She really is very considerate.

Anyway, I set out alone on September 14th, starting with a steady climb through sparse silver fir woods towards Hannegan Pass. The trail parallels Nooksack Ridge, with occasional glimpses of a variety of peaks, including ones I’ve hiked on or near for years. For some reason, I’d never hiked to Hannegan Pass, so this trail was new to me, as was the whole area in the direction (east) I was headed. 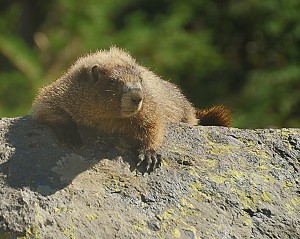 Marmot Along the Trail

Once I dropped over the pass and descended to the headwaters of the Chilliwack River, it felt like I’d really left civilization behind. The terrain there is dry, a real contrast to some of the rainforest on the west side of the pass. Along with the scenery change, fellow hikers became scarce. More than anything, what I noticed was the absence of civilization. Hours would go by with nothing but step after step on a dirt trail that skirted Hell’s Gorge then climbed steadily through mountain hemlock towards Copper Ridge. By afternoon, the thinner air and my heavy pack led to a noticeable pulse pounding in my temples. I reminded myself repeatedly to slow down and drink more water. 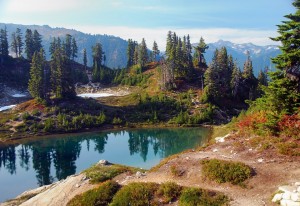 By late afternoon, the trail leveled, and I broke through the trees to the alpine meadows of Copper Ridge. The views were so beautiful it almost moved me to tears. In every direction mountain after mountain extended as far as I could see. What surrounded me seemed so much a part of the spiritual realm and so far removed from the civilization that I’d left behind.

The trail continued, winding back and forth across the ridge, until it dropped down to  shallow, turquoise-colored Egg Lake, my home for the next two days. I picked a campsite on a knoll with views of the lake, Copper Mountain and the Silesia Creek valley to the north. After setting up camp and cooking dinner, I had just enough time to climb back up to the ridge for sunset.

In the middle of the night, I stepped out of the tent into a clear, moonless night. Bright stars extended from horizon to horizon. A vast wilderness surrounded me, nothing compared to the vast universe that extends out for billions of light years in every direction. Rather than feeling small, I felt connected to everything around me. It also stirred my hope that Earth will soon join the Galactic Federation, and I might visit some of those distant places in the galaxy.

The next morning, I crawled out of the tent again, this time with a pink glow on the horizon. Camping at Egg Lake for two nights allowed me to leave most gear behind, as I setout along the ridge towards Copper Lookout and Copper Lake. At the lookout, I met a friendly ranger that offered me water. She also suggested I continue beyond Copper Lake, to a small, scenic waterfall.

Beyond the lookout, I reached a cliff with views of deep-blue Copper Lake, and a whole string of mountains across the Chilliwack Valley, like Mineral, Indian, Bear, and Redoubt. Copper Lake’s three campsites sat empty, including one that includes a small island you can reach by rock hopping. 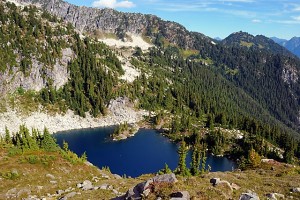 For lunch, I sat on a granite slab overlooking the waterfall the ranger had suggested. By dinnertime, I’d covered many miles, with lots of climbing and descending. My fettuccini with tuna tasted delicious, probably much better than it would’ve at home. The stars put on another wonderful display that night.

I broke camp at dawn, wolfed down some oatmeal, and started the long trek out. As I got closer to the trailhead, I started dreaming about my next trip into the area. The park’s network of trails provides many options, and I definitely plan to visit this area again.

If you go, you’ll need a permit from the National Park Service, which you should be able to get at the Glacier ranger station. These permits are in high demand, so you may need a backup plan. There are plenty of beautiful backpacking trips nearby, but outside the park, which don’t require a permit. Glacier, and the Hannegan Pass trailhead are east of Bellingham, Washington on Highway 542. Be sure to check the trail conditions, as this area is buried in snow for much of the year.

My book, Simple Meditation, includes a chapter on walkabouts and vision quests, like the trip I made to another part of the North Cascades. Copper Ridge would be a wonderful place to do such a trip.