Fantastic! I got recruited for an impromtu road trip to three national parks: Glacier, Yellowstone and Theodore Roosevelt. Along with that, I would see 3800 miles of our glorious country, visit my mother in Minnesota, move our daughter to Washington, and do it all in five days.  Truth is, it was a trip to pick up my daughter, but I decided to squeeze in the national parks too. My schedule didn’t leave much times for the parks, so I planned to hit a few highlights in each, all at a whirlwind pace.

I set out from Bellingham, Washington on August 27th, taking a scenic route through the North Cascades.  I could have just stayed on the freeway, but what’s a few more miles? I sure didn’t want to miss any potentially stunning pictures. In the Cascades, I saw some beautiful rivers, mountains and waterfalls, but the lighting just was just too overcast for great pictures. Once over the Cascades, I made a brief stop in Leavenworth, Washington, a scenic tourist town that looks like a Bavarian village. I filled up on bratwurst, visited a few quaint shops and moved on towards the Columbia River and eastern Washington.

After dark that night, I made it to a campground in Glacier National Park and crawled into a sleeping bag in the back seat of my Toyota Tundra. The next morning, I was up before dawn, hoping to catch sunrise over Lake McDonald. As I brushed my teeth, I debated on whether to throw the camping fee into the box. All I had really done was park in a spot for a few hours, not really what you’d call camping. I’d pretty much decided I’d pay, just so my conscience wouldn’t trouble . I arrived back at my truck to find the campground host filling out a registration in the dark. Wow, they sure get up early. I gave him the money and set out to get some pictures of Glacier. 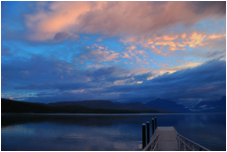 Driving through Glacier brought back memories for me of many earlier trips. Just out of high school, I had decided to spend a year as a mountain man. My plan was to get a PO box in West Glacier and camp in the mountains south of the park. After about a month alone in the mountains, I decided that civilization in Minnesota wasn’t really so bad. Years later, my wife and I brought our kids to Glacier for a week of rafting, hiking and sightseeing. It was one of the best vacations we ever had.

With these memories going through my mind, I arrived at Lake 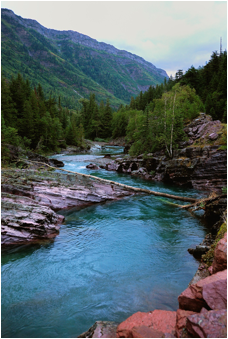 McDonald at sunrise. Like the day before in Washington, the scenery was beautiful but a bit cloudy. This is a definite problem when you only have one day in a park. I shot a whole bunch of pictures anyway, so I’d have something to discard later. Go figure.

Making my way deeper into the park, I stopped at a few trails and falls, hitting the trails at a run with camera gear flopping at my side. Back in the truck, I started climbing Going to the Sun Road, which was carved into the side of the mountains in 1933. The road is always narrow and winding, but road construction made it incredibly so. I folded in the large mirrors and reflected on memories of another earlier trip. Shortly before my mountain man experiment, my dad lent my friends and I his Winnebago, so I could do some scouting. Looking at the cliffs which overhang the road, and the shear drops, it was obvious why motorhomes are no longer allowed. Sure enough, I managed to bang the Winnebago into a cliff, moving over for an oncoming car. I don’t think my dad even mentioned the dent. What could he expect from a bunch of 18 year olds? 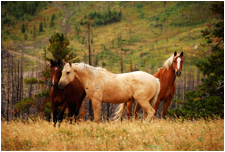 Although it was August, Logan’s Pass had three inches of new snow and a horrendous wind chill. Hidden Lake, and the trail to it, was still beautiful, so I sat on a rock overlooking the lake and meditated for 15 minutes. A great alternative to Hidden Lake, is to hike north from Logan’s Pass to Granite Park Chalet, a rustic and remote lodge surrounded by alpine meadows, jagged mountains and grizzly bears. That all day hike was too much for this trip. Next, my quick tour took me to Saint Mary Lake, Two Medicine Lake and into East Glacier. Just east of the park, I came across some very rugged looking free-ranging horses with lots of scars. I’m sure there were some fascinating stories behind all those wounds.

Once I left Glacier behind, all I had to do for the rest of the day was drive across what remained of Montana. For those of you that haven’t done this, Montana is one seriously large state. Highway 2 has long straight stretches that seem to go on forever, and it is indeed big sky country. I reached Wolf Point, as the sun was setting, and turned south onto Highway 13. Between Wolf Point and Glendive, I lost count at roughly 60 mule deer, including one with the most monstrous set of antlers I’ve ever seen. Unfortunately, it was way too dark for pictures. Near the North Dakota border, I pulled into a rest area to get some sleep. 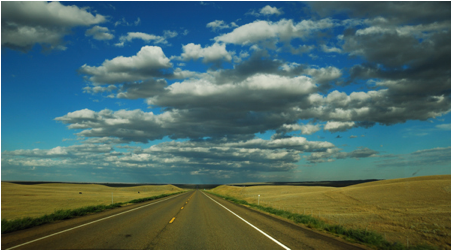 By dawn, I was up again photographing an elk herd, just outside Teddy Roosevelt National Park. Over the years, I had taken I-94 through the park more times than I can remember. A few of those times, I had thought of stopping and visiting the park, but I always thought it looked like a bunch of little, dried-out hills with nothing much worth seeing. Why waste time on my way to Glacier? where they have some real mountains.

Once in the park, I felt a real connection, driving and running among its buttes, plateaus and gulleys. The connection may have been due to a past life I had as an Oglala Sioux Indian, spending much of my time in South Dakota’s black hills. Or, maybe the blissful feeling I felt was because the sun had finally come out. For whatever reason, I sure enjoyed the winding road through the park, stopping for pictures of bison, prairie dogs, antelope, grouse and wild horses. If I’d known there was so much wildlife, I would’ve stopped years earlier. 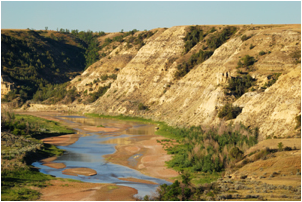 Along with touring the park, I managed to cover North Dakota and half of Minnesota, arriving in St Cloud early enough to get a truck wash and oil change. The next morning, I arrived at my daughter Sarah’s apartment so we could load her stuff into the truck. I was surprised to find that even leaving her furniture behind, her collection of stuff exceeded the carrying capacity of my full-size, extended cab Tundra pickup. We stuffed as much as we could in, while she decided what to leave behind.

Our next stop was the Twin Cities, where we spent a night at my mom’s. I also managed a side trip to visit some old friends. I mean ones that I’ve known a long time. They’re not that old.

After a good breakfast at mom’s, we set off towards Yellowstone. The drive was a great opportunity to catch up with happenings in Sarah’s life, and to share all the summer’s events in Washington. It was also an opportunity for her to try out her dad’s traveling style, eating and sleeping in the truck along with driving almost constantly. No point in wasting time. Unfortunately, the truck had gotten a little less comfortable now that it was stuffed with so much stuff. I just thought back to my life as a Sioux in the 1800’s and knew that I’d survived much worse. We spent the night sitting upright in a truck stop, listening to semis coming and going. Maybe Sarah will look back someday and think that “if I survived traveling with dad, I can survive 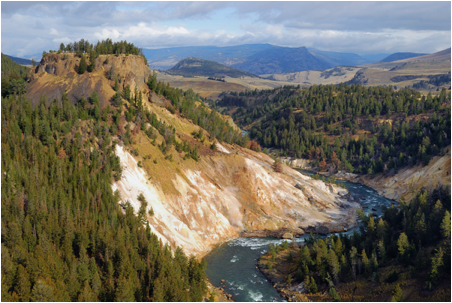 anything.” Like my usual routine, we arrived in Yellowstone at sunrise, hoping to get some of the best photography light of the day. At least that’s what I was hoping. Sarah may have been hoping to get some more sleep. Just after crossing into the park, we came across a herd of elk. The stubborn animals wouldn’t move out of the trees and hold still for a picture. Well, I was pretty sure there were plenty more animals in the park. Our first scheduled stop was Lamar Valley, a broad open valley that’s known for its abundance of game. Unfortunately for Sarah, in addition to “scheduled stops,” traveling with me involves lots of unscheduled stops for wildlife, 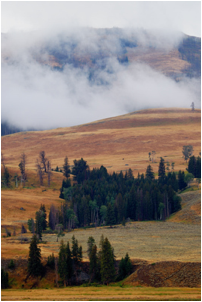 scenic overlooks or because the lighting looked just right. She, and the rest of the family, spent a week with in Europe with me in June, while I shot over 1600 pictures, so she probably knew what to expect.

After stopping for antelope, a bison and waterfalls, we made it to the 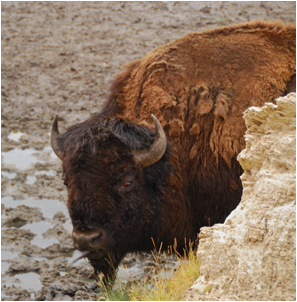 Lamar Valley. In order to find game, all you need do is watch for cars lining the road. We pulled in with the rest of them and watched as a distant wolf pack moved in on a bison herd. The wolves were unsuccessful with their hunting, but it was wild to watch. Anyone remember Mutual of Omaha’s Wild Kingdom?

Farther up the valley, I got out and ran around a rock formation, looking for a scenic photo angle up the valley. Rounding the corner, I almost ran into an ornery looking bison. As he glared at me, I defensively drew my camera, thinking about the warnings that more people are attacked by bison then by bears in the park. As I took his picture, his only reaction was to stick his tongue out at me, then he went back to standing around. Good thing I found a lazy bison.

Grand Canyon of the Yellowstone was an inspiring sight. The upper and lower falls have flows as high as 60,000 gallons of water per second. The 1200 foot deep canyon is steep and colorful. After the falls, we hiked around Norris Geyser Basin, careful not to step off the boardwalk into steaming water. 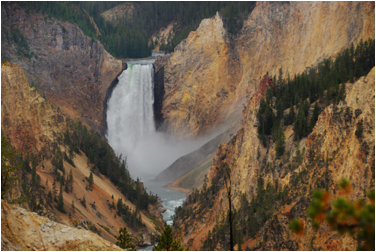 After Sarah’s exciting Yellowstone tour with dad, she was anxious to get to her new home in Washington, a condo near our house. I even offered to pull over in another truck stop for some sleep, but she was sure that driving straight through was a better idea. We got to Bellingham at four in morning, ending the fast-paced scenic national park tour. Sarah is now living happily in Washington and enjoying occasional picture taking outings with her dad.