Can you sea kayak on a lake? In order to answer that challenging question, I signed up for two trips with the Whatcom Association of Kayak Enthusiasts (WAKE), one on Ross Lake and the other to Clark Island, in the Salish Sea. To those of you that think the answer is obvious, don’t be so quick to judge. I’ve paddled my whitewater kayak in sea, as you can see in the video below. This wasn’t considered whitewater kayaking, and it wasn’t even considered sea kayaking. It was considered paddling a slow, stubby kayak in the sea, and getting tossed around a bit. What makes sea kayaking sea kayaking? Is it the kayak? Or is it the sea? 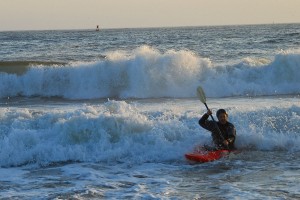 Curt in Whitewater Kayak on the Sea

You might wonder why I would even care. Well, my wife Mary and I had recently joined WAKE. This is a group of serious outdoor enthusiasts, and we certainly didn’t want to look like numbskulls. The Ross Lake trip leader, Reg Lake, along with a group of famous climbers had once carried their kayaks over California’s Mt Whitney to be the first ones to kayak the Upper Kern River. One of the couples on the trip had both belonged to Rocky Mountain Rescue Group, one of the oldest and most experienced teams in the country. Another trip participant would qualify for mountain man status, living and working deep in the North Cascades. Others in our group had kayaked and adventured in remote locations all over the world. So, imagine if on the Ross Lake trip, I slipped up and said, “isn’t this sea kayaking stuff fun?”

One of them might have responded, “Sea kayaking? This is lake kayaking! Don’t you know anything about sea kayaking?” For the same reason, I couldn’t ask anyone the sea kayak question. I’d have to figure it out for myself. Thus, I signed up for a lake trip and a sea trip. Before I answer the big question, let me tell you a little about these trips.

Ross Lake is a spectacular 23 mile long lake that winds through the North Cascades Mountains. Although most of the lake is in Washington, my wife Mary and I decided it’d be easier to reach the lake by driving up to Hope BC, Canada and down a 40 mile gravel road to the boat launch, which is just across the US border. Three out of the nine of the trip participants opted for the alternate route, paddling across Diablo Lake, up a canyon to the dam, then calling Ross Lake Resort for a portage and paddling another 10 or so miles up the lake. 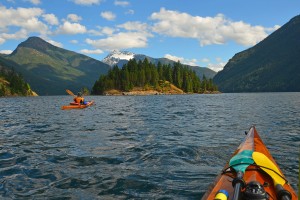 As it turned out, we struggled hard for each of the 12 miles against a 15 knot head wind. We continued for hours because waves crashing into the rocky shoreline made it unsafe to stop. It sure seemed like sea kayaking conditions. During this struggle, Mary barely responded, when I’d ask how she was doing, so I worried. Is she miserable? Will she ever do a kayak trip with me again?

When we finally reached Lightning Creek Camp, sometime after six, the group that had taken the southern route greeted us cheerfully. They had effortlessly been carried up the lake by wind and waves, mainly using their paddles to steer. We forced a smile and said, “That’s great!”

Although our Lightning Creek campsite was remote, the National Park Service does a fine job of furnishing and maintaining the campsites. We had an outhouse, picnic tables and a bear box. There are lots of black bears in the area, and a few grizzlies too. If you’re not familiar with bear boxes, your food goes in the box, not the bear.

In camp, we really enjoyed visiting with our fellow paddlers. I already mentioned Reg Lake and the search and rescue couple. Our camp neighbor, Pam Beason, whom we shared a picnic table with, is a novelist, part-time private investigator, scuba diver and adventuress with plenty of fascinating stories. 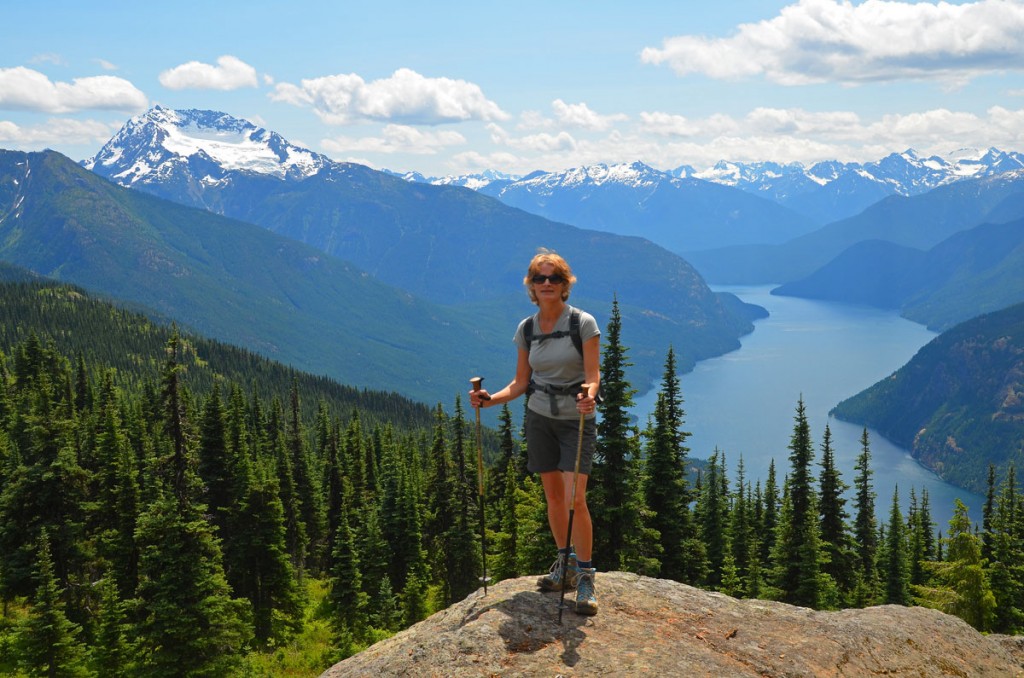 After a surprisingly good sleep, we had breakfast and discussed our day’s adventure, a hike up Desolation Peak. Three members of our party kayaked to the base, while the rest of us opted for the longer route, hiking from camp to avoid more kayaking in the wind. Our longer route covered 14+ miles and 4,400 feet of elevation gain. We definitely got a well-rounded workout, working our upper-bodies the first day and our legs the second day. Views along the way and from the lookout were outstanding, as you can see in the photos. We returned to camp with a strong sense of accomplishment. 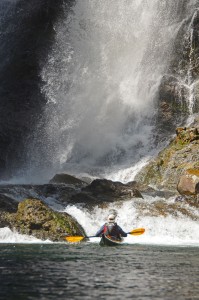 Reg Lake and a Waterfall

The third day was glorious! We started out early and paddled up Lightning Creek and other fjord-like inlets, finding crystal clear water in cascading creeks and beautiful waterfalls. Reg Lake and I even did a little whitewater style surfing with our sea kayaks. Unfortunately, he never referred to it as “sea kayaking,” so my question still hung in the air. If you’re on a lake is it sea kayaking? On our paddle up the lake, we didn’t have much wind, giving us a chance to visit all the places we’d paddled right by on the way down. We visited more waterfalls, campsites and took a close look at miles of beautiful shoreline.

Clark Island in the Salish Sea

On the following weekend’s trip, my wife opted not to join me. She apparently had enough kayaking to last a few weeks. I set out with six other sea kayakers for Clark Island, in the Salish Sea. You probably noticed that I confidently referred to them as sea kayakers, since we were in sea kayaks and on the Salish Sea, leaving no room for doubt. 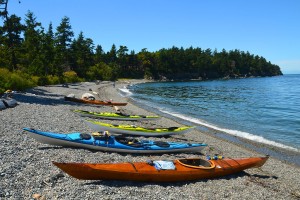 We paddled in protected waters until Pt Migley, at the north end of Lummi Island, where we were suddenly exposed to wind and waves from far up Georgia Strait. To make matters more exciting, Pt Migley has shallow rocks, currents and a dozen or so harbor seals that slid into the water as we paddled by, reminding me of the crocodiles in a safari movie.

Between Lummi and Clark Islands, we contended with wind, waves, and crossing a major shipping channel, definitely sea kayaking. At Clark Island, we pulled our kayaks up onto a gravel beach with stunning views of Mt Baker and the Twin Sisters. Like everyone else, I set out to find an appropriate campsite, choosing one set just back from the beach with surrounding brush for privacy. 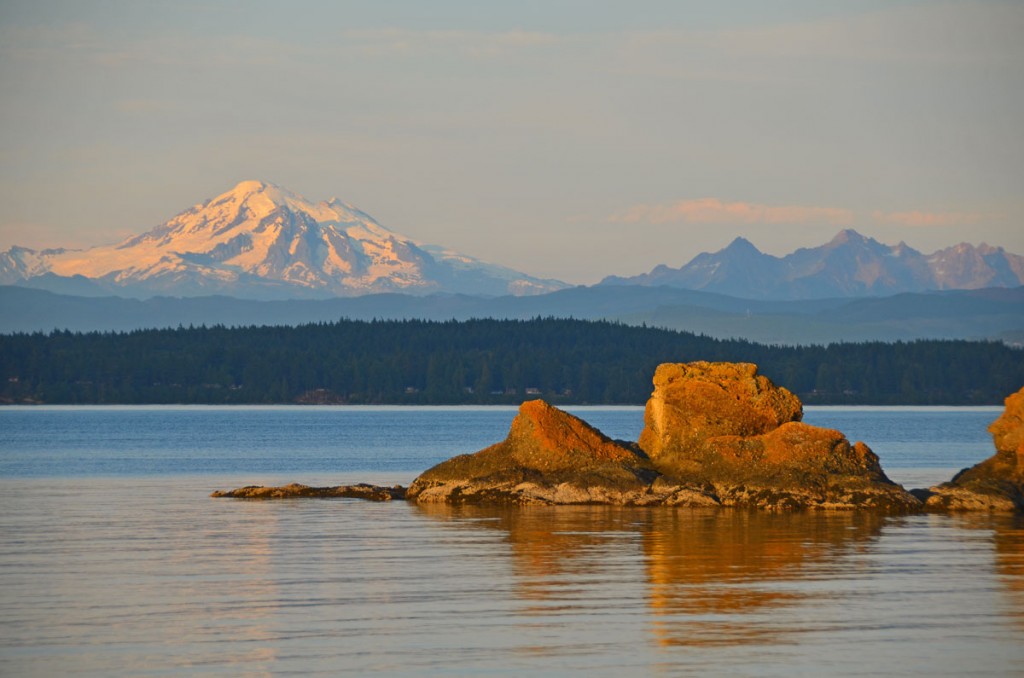 Once I’d organized my camp, I set out on a trail to explore the island. We got a better look at it that evening, when four of us paddled around the island. After dinner, we watched Mt Baker turn from snowy white to alpenglow red; then we hiked across the island just in time for sunset. 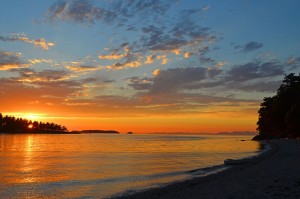 Around 1:00 AM, a fierce wind hit, pulling up one of my tent stakes and shaking the heck out of my tent. I stared at my tent ceiling and listened to it flap while contemplating what the wind would mean for us, if it didn’t die down. How big would the waves be? If we had to sit it out, how much food did I have? How much water? Eventually, I went back to sleep and awoke to relative calm. Later, I learned that most of my fellow kayakers had been awake thinking similar thoughts. Our paddle back actually turned out to be quite pleasant.

As to the sea kayaking question, it was clear that paddling a sea kayak on the Salish Sea qualified as sea kayaking. I still wasn’t sure regarding paddling a sea kayak on a lake, so I tried Wikipedia. Searching for “sea kayaking,” their entry for “sea kayak” comes up. It describes “a kayak developed for the sport of paddling on open waters of lakes, bays, and the ocean.” Clearly, it mentions lakes. We’ll have to go with the answer “yes” that it is sea kayaking if it’s on a lake, as long as you’re in a sea kayak. If Wikipedia says it, it must be true. The truth is it really doesn’t matter, as long as you’re enjoying yourself. I sure did on both of those trips.